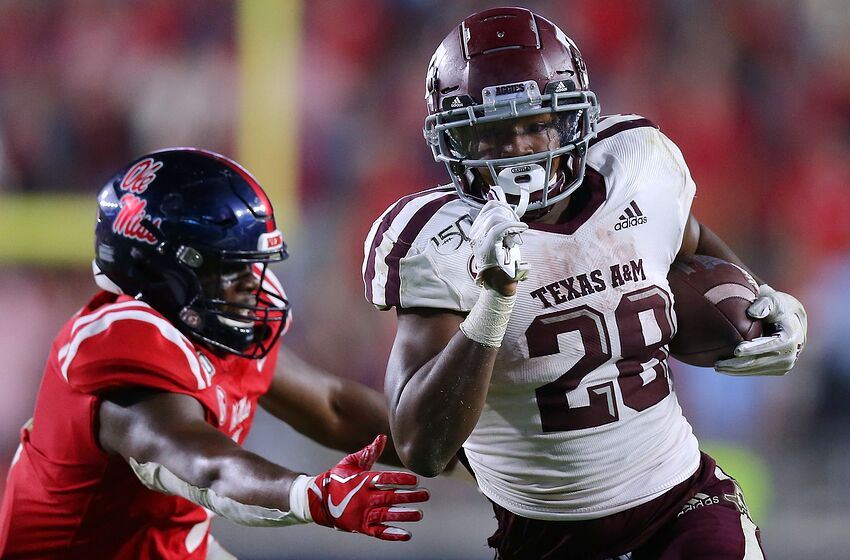 OXFORD, MISSISSIPPI - OCTOBER 19: Isaiah Spiller #28 of the Texas A&M Aggies rushes for a touchdown as Lakia Henry #1 of the Mississippi Rebels defends during the second half at Vaught-Hemingway Stadium on October 19, 2019 in Oxford, Mississippi. (Photo by Jonathan Bachman/Getty Images)

Texas A&M Football did not look particularly good on offense in their win over Ole Miss, but the Aggies showed some serious improvements in their run game.

Texas A&M Football had relied far too heavily on their passing game on offense throughout the 2019 season. Against Ole Miss, it was the run game that carried the Aggies to a much-needed win.

In previous games, particularly in SEC conference play against Alabama, Auburn, and Arkansas, the run game was almost completely absent. The Aggies did not get any production from their running backs, as both Isaiah Spiller and Jacob Kibodi were unable to do much of anything.

Quarterback Kellen Mond had been the leading rusher in SEC confernece games, running for nearly 100 yards against Alabama a week ago. That game was not a win, partially because of the fact that the Aggies could not put forth a balanced attack on offense.

Against Ole Miss, the Aggies looked a lot different. Mond did not look good at all through the air, throwing a pair of interceptions. However, on the ground, Spiller put up 78 yards, his most since week three against Lamar, and also ran in a touchdown. Mond had 76 yards of his own, giving him over 160 in his last two games combined.

Getting the running game in a groove at this point in the season is vital, as the Aggies schedule is not getting any easier. If Spiller can continue to put up numbers similar to what he had against Ole Miss, the pressure should be off of Mond.

Next: Kellen Mond takes a step back in win

Spiller showed some serious flashes of potential early in the season, but that potential was pretty much flushed out with a trio of poor performances in SEC games. After this game, hopefully Spiller will have a great deal of momentum to carry over into the rest of the season.